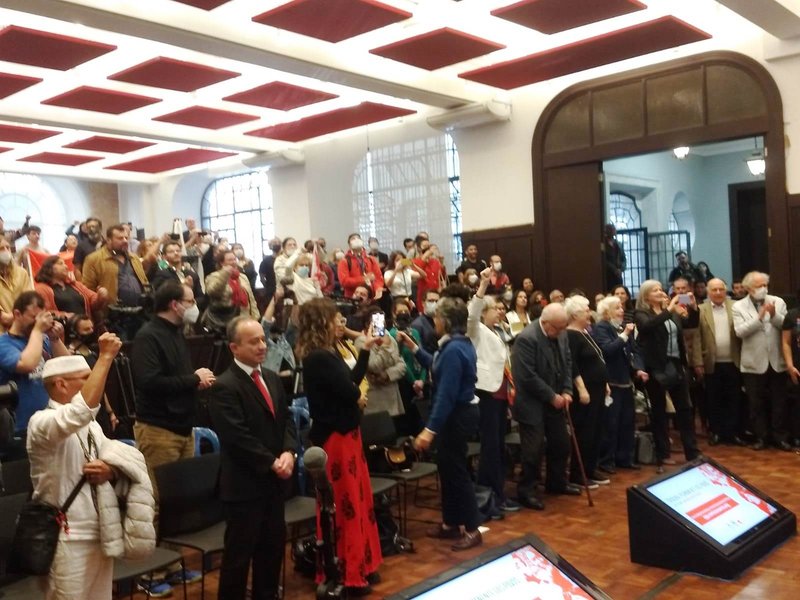 The Permanent People's Tribunal (TPP) convicted President Jair Bolsonaro of a crime against humanity and human rights violations for acts and omissions committed during his administration during the Covid-19 pandemic. The sentence was announced on September 1, at the USP Law School, in São Paulo.

The complaint was presented at the end of May, at the 50th Session of the TPP, under the theme Pandemic and Authoritarianism, by the organizations Commission for the Defense of Human Rights Dom Paulo Evaristo Arns, Black Coalition for Rights, Articulation of Indigenous Peoples of Brazil (Apib) and International Public Services (ISP).

The indictment charges Jair Bolsonaro with the deliberate spread of the coronavirus, which has caused more than 600,000 deaths in the country, with a special impact on indigenous and black populations, as well as health professionals. According to the TPP jury, the deaths could have been avoided if measures advised by the World Health Organization (WHO) and scientists had been adopted.

The Italian epidemiologist and philosopher Gianni Tognoni, secretary general of the TPP, opened the sentence reading session and gave the floor to the Argentine judge Eugénio Zaffaroni, a member of the jury, who gave the result: “It was established that Bolsonaro committed two illegal acts - one serious violation of human rights, publicly inciting their violation against large sectors of the Brazilian population who are discriminated against, and a crime against humanity, opting for a health policy contrary to isolation, prevention of contagion and vaccination, which intentionally led to the death of tens of thousands of people”.

Political scientist Paulo Sérgio Pinheiro, former Minister of Human Rights, founding member and first president of the Arns Commission, highlighted the dehumanization to which black and indigenous populations, the biggest victims of the coronavirus in Brazil, are historically subjected. “The Covid-19 pandemic has opened up the fragile situation of the black population and indigenous peoples in the face of the virus. This brutal revelation gained more clarity after the 2018 elections, with the assault on state institutions by a far-right neo-fascist government,” he said.

According to jurist and former attorney general of the Republic, Raquel Dodge, who participated in the event, applying and complying with the Constitution will only be possible “if we know well the facts that attack it, the atrocities that we cannot admit and the conduct that needs to be punished.” so that they don't happen again." For her, the court had not only the role of assessing whether the combination of pandemic and authoritarianism had been responsible for the most harmful consequences suffered by blacks, indigenous people and health professionals, but also of helping to defend the democratic rule of law. The director of the USP Law School, Celso Campilongo, also participated in the opening panel.

For prosecuting attorney Eloísa Machado, a supporting member of the Arns Commission, it is “a relief from the sentence that recognizes Bolsonaro as an international criminal”. But, he says, the work is not over: “The TPP asked the plaintiff organizations to take the case to the International Criminal Court (ICC). Well, the case has already been taken and is being evaluated by the ICC Prosecutor's Office. We are sure that there will be an investigation, in addition to crimes against humanity, also for genocide against indigenous peoples. That day will come. And we can have a session to remember that this story began here, in this room, with the reading of the judgment of the Permanent People's Court”. The accusation was also supported by Maurício Terena, a lawyer and legal advisor for the Articulation of Indigenous Peoples of Brazil, and Sheila de Carvalho, a lawyer and articulator of the Black Coalition for Rights.

The TPP leaves, along with the sentence, a recommendation for the International Criminal Court (ICC) to deliberate on the accusation of genocide in the conduct of President Jair Bolsonaro. There is already a complaint from the Apib and The Arns Commission with the ICC with this aspect.

Indigenous leader Dário Kopenawa, vice president of the Hutukara Yanomami Association (HAY), attended the ceremony as a guest of honor at the Court. Manuela Morais, president of Centro Acadêmico XI de Agosto, gave the last speech at the event.

The verdict of the Permanent People's Tribunal has a symbolic and reputational impact, without applying penalties, and serves as an invitation for the competent national and international bodies to proceed with the judgment of the complaints already registered against President Jair Bolsonaro.