The Yanomami's outcry about violations of their rights 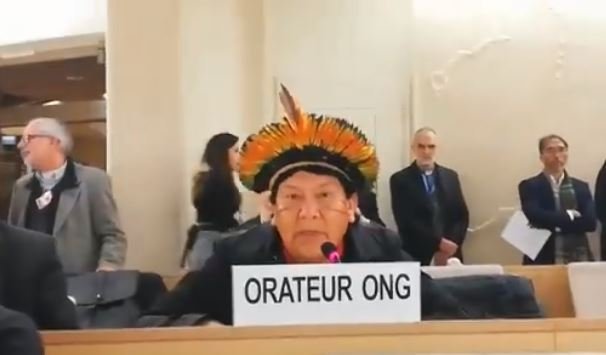 The Yanomami's clamor for help has been going on for a long time, but violations of their rights have worsened under Bolsonaro. On March 2, 2020, Yanomami leader Davi Kopenawa gave a dramatic testimony at the opening of the 43rd Session of the UN Human Rights Council (HRC) in Geneva (Switzerland). Alongside the Arns Commission, the Socio-environmental Institute and Conectas, he took complaints about the situation of indigenous peoples in Brazil to the international body. His speech, translated into three languages, was released in an independent session, in the context of the UN HRC.

"Things are like this. Now hte Whites don't live far from us. They keep coming closer. In the city of Boa Vista, they have become very numerous, they will increase steadily, and now they exhort each other. They say: “Yes, we are going to seize the precious goods of the Yanomami land. These goods are not yet real goods, but they are precious goods, hidden in the gravel of the earth. We will take these riches, plus the trees from the forest and we will settle in the Yanomami land! ”. That's what the Whites say to each other and it's how they encourage each other: “Come to Boa Vista! I, the government of Roraima, will give you work! You will no longer be poor! ”.

These are their words. They want to exchange their money and goods. So the Whites, all of them, keep looking at our forest to try to get hold of it. They say: “Yes, we are going to take lots of money from the forest. The Yanomami people do not know anything, so the wealth is ours ”. That is what the Whites say when encouraging their workers to come to the forest. “Yes, you can go! Do not be afraid! The Yanomami people seems to be numerous, but we really are! Even if they shoot some of us, we will still be very numerous! ”.

Saying all these things they have increased so much and everywhere, in the forest, in the rivers, in the highlands. They want gold. As the value of gold increases more and more, they are constantly increasing too. They have thought: “Yes, now the value of gold is very high. Let's all go to the Yanomami land! ”. That is how they have entered the forest through all sides, across the rivers, in the trails, with their planes and helicopters. This is how things are today. They have opened doors of entry by the rivers and in the air. They have cleared to make airstrips everywhere. They have also cleared to make new trails in the forest. In the Apiaú River basin, that is where they arrive in large number. By the Parimiú River, too. They have already been expelled from there, but they have returned even more numerous! There is also another trail, which goes up along the Catrimani River.

Along the Apiaú River trail, they approached the place where the isolated group Moxihatetea lives. At the headwaters of the Apiaú River, where these isolated peoples live, they begun to attack and destroy the forest and its rivers. At first, they have worked with their hands, but now they use machines. Parts of these machines come down from a helicopter and then they assemble them right there. And so. The Moxihatetea are vigilant and wish to stay away from the Whites. They do not know gold prospectors and do not want them to approach. That-s why they have fled many times. But now, they can no longer run away. Before they took refuge in the deep forest, far from the trails, and there they were in temporary camps, as when they were on hunting expeditions, far from home. The garimpeiros then began to steal food from the fields - manioc, bananas, sugar cane, when their supplies of rice, flour and cans of canned food were exhausted. The Moxihatetea warriors attacked them with arrows, but the miners, more violent, wanted to take revenge by shooting with shotguns. This is what happened with the isolated Moxihatetea, and I think that is very wrong.

From there they fled again up the river, but in that direction there are also garimpeiros installed on the Catrimani River, creating an obstacle. The indigenous are now surrounded. So I am speaking to defend the Moxihatetea. But I don't know their homes, any more than you do. I only saw them from the sky, from the plane. I never visited them on foot. We’ve  never spoken. That is why I am very concerned. Perhaps they will soon be wiped out. It is what I think. The garimpeiros will undoubtedly kill them with their shotguns and their illnesses, their malaria, their pneumonia ... The indigenous people do not have protective vaccines, they will all disappear.

And there are not only them in the Yanomami forest land. Further on, in the Erico region, other isolated peoples live. They are like the Moxihatetea. Also, on the other side of the Catrimani River, downstream, at the headwaters of the Rio Xeriuini, there are other isolates. And still in a an afluent river of the Rio Arca, in the center. That's why we fight for them. We are very concerned about what might happen to them. There are others isolated in the forest near the Waimiri-Atroari and there are others all over the Amazon! They live isolated for a long time and want to continue like this! They are the ones who truly care for the forest. It is the Moxihatetea and all the isolated peoples of the Amazon that still guard the last forest. But the Whites don't know that, because they don't understand the language of these people. White people just think, “What are they doing here? ”. And when the Whites arrive, it is their epidemics that also arrive with them.

That is why I reflect: “What do the Great Men [authorities] think of the Whites? Don't they want to let us live in peace and in good health? Do they really hate us? ”. It is evident that they consider us as enemies, because we are other people, we are inhabitants of the forest. We were raised in the Amazon rainforest, in Brazil, and that is why the Whites do not know us. They are satisfied with attacking and destroying our forest at will. It is not their land, but they have declared that it belongs to them. They think: “This forest is ours. We are going to pull the gold out of the soil, cut down the trees, we are going to install here other whites who need land, the cattle ranchers, the colonists, and then we are going to end the Yanomami people ”. It's not just what they think, now it's even what they say!

The new president of Brazil, I neither mention his name nor say to him: “As you are the President, you should protect us! ”. I already know the words of this president: “Let all Whites who want money, cattle ranchers, loggers, prospectors and settlers come too. I am going to give you this forest, to end all the Yanomami people, all of them, and for the Whites to become the owners. It's our land and that's fine! So it is, I am the only Land Lord! ”. These are your words. These are the words of one who makes himself a great man in Brazil and calls himself the President of the Republic of Brazil. This is what he truly says: “I am the owner of this forest, these rivers, this subsoil, the ores, the gold and the precious stones! All of this belongs to me, so go get everything and bring it to the city. We will make everything become merchandise! ”.

It is what the Whites think and it is with these words that they have always destroyed the forest. But today, they are running out of what little is left. They have already destroyed our trails, dirtied our rivers, poisoned the fish, burned the trees and the animals we hunt. They also kill us with their epidemics. Some Whites feel sorry for us, but not their Great Men who say that we are animals. They say: “They are monkeys, wild pigs! ”. However, it is these men who do not know how to think. They do not know how to work in the forest, they do not know its power of fertility në rope. They just walk around, destroying. They just want to get to know the forest from the top of their satellite machines, which come out of the cities and look at the trees, our houses, the rivers, the hills, the beauty of the forest. After that they call the others: “Yes, come here. We all from Brazil are going to take away the precious goods! We will accumulate all this in the cities! We are really going to become the People of Merchandise! We will not be poor anymore, we will have many goods! ”. That's what they say between them. That's what I wanted to tell you here. These people are indifferent to the words of those who defend the Yanomami people. Still, I send that message.

I would like the UN Human Rights to be able to look at us and give us a very strong support so that the authorities of Brazil - the politicians of the municipalities, the states and the capital - all these White people from the cities, respect us and do not bother us anymore. May they understand and recognize the rights of human beings, just as the UN does. UN Human Rights are built to defend those who suffer. So, I would like the UN to do a good job, denouncing very strongly what happens to us, so that the authorities of Brazil respect the Yanomami People, all the isolated peoples and all the peoples still not recognized.

My people have the right to live in peace and in good health, because they live in their own home. We are at home in the forest! The Whites cannot destroy our home, otherwise it will not end well for the world. We take care of the forest for everyone, not just for the Yanomami and isolated peoples. We work with our shamans, who know these things well, who have a wisdom that comes from the contact with the land. The UN needs to speak to the authorities in Brazil to remove - immediately - the gold miners or, the garimpeiros that surround the isolated groups and all the indigenous peoples in our forest."